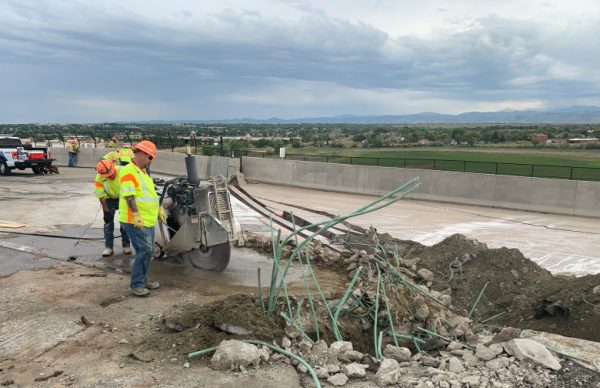 The highway from Boulder to Denver is collapsing at a bridge approach 45 feet above ground, concrete slumping away off a widening chasm as fast as an inch per hour with a 5-foot drop over the weekend.

This destruction related to environmental conditions — weakening of saturated clay under a 5-year-old stretch of U.S. 36 adjacent to a former reservoir near Broomfield — forced the closure of eastbound lanes and triggered a Colorado Department of Transportation blitz Sunday to re-route 14,000 commuters on free buses. The collapse between the Church Ranch Boulevard and Wadsworth Boulevard exits left a 200-foot gash resembling the fault line of an earthquake.

Colorado Front Range vehicle traffic already has been choked this summer as CDOT contractors work to widen Interstate 25 to make room for more vehicles. And CDOT officials on Sunday were bracing for major metro Denver disruptions. They said they’ll pay the Regional Transportation District about $70,000 a day for the free bus transit through Tuesday as alternative routes for cars and trucks are set up.

“We’ve seen the separation at up to an inch an hour. You just cannot have people going through here,” CDOT director Shoshana Lew said Sunday evening, standing with engineers on the highway as crews cut through concrete and tried to assess stability.

“If working from home is a viable option, the next few days might be a good time to think of it,” Lew said.

“Be patient, especially during the early part of this week. It is an unusual situation. We know many people will be frustrated. Focus on safety.”

The highway was closed at the Wadsworth and Church Ranch exits, and officials said they’re hoping to route traffic both ways into the three westbound lanes by the end of the week.

RTD officials issued a bulletin warning that buses will face the same traffic detours as other vehicles and that riders are likely to face standing-room conditions and delayed travel.

State officials recommended that drivers use Colorado 93 to West Sixth Avenue, Wadsworth to Interstate 70, and Highway 7 (Baseline Road) to Interstate 25.