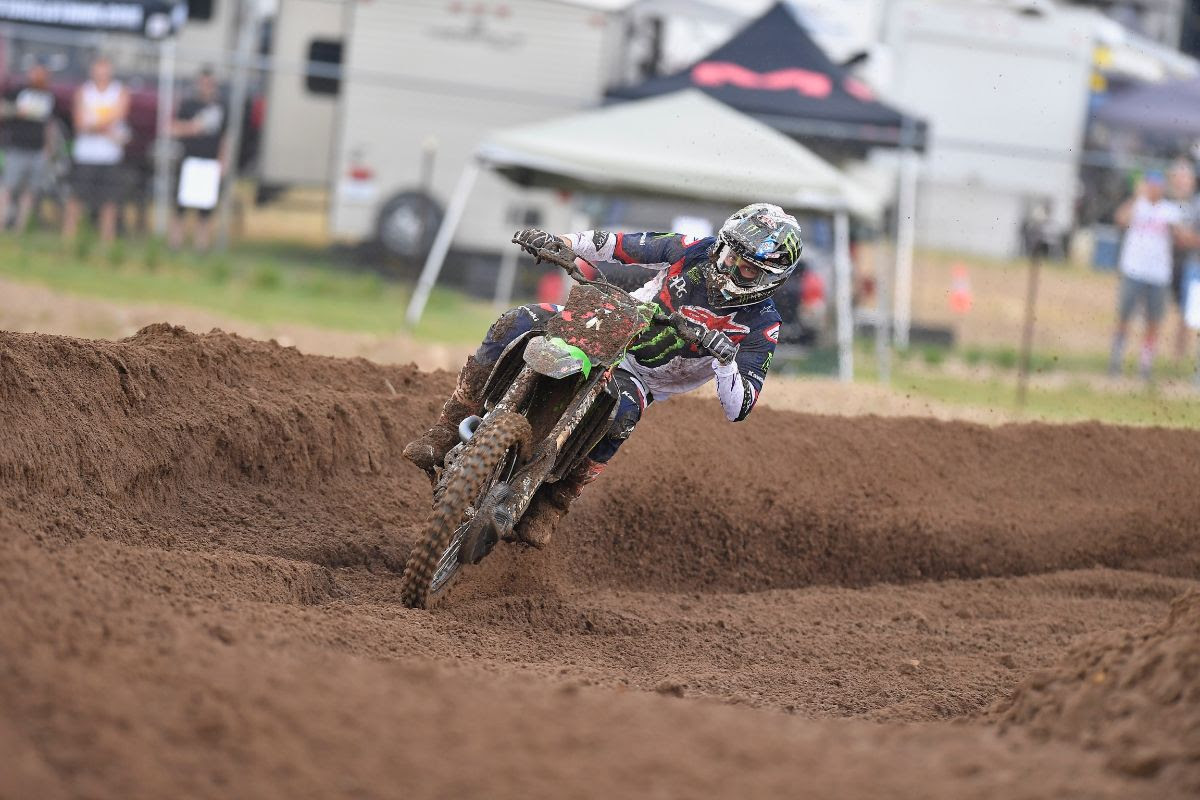 Foothill Ranch, Calif. (July 7, 2019) – Round 7 of the 2019 AMA Pro Motocross Championship returned to Buchanan, Michigan for the 45th annual RedBud National over the 4th of July weekend. With arguably the most energetic crowd of the entire series, the RedBud faithful donned their red, white and blue attire while chanting Monster Energy® Kawasaki rider Eli Tomac’s name after he captured his third overall 450MX victory of the season, and the fans continued on for Monster Energy/Pro Circuit/Kawasaki rider Adam Cianciarulo as he earned second overall in the 250MX class.

As the rowdy crowd lined the fence for 450MX Moto 1, Tomac fired out of the gate in third and began his mission to take over the lead. On Lap 3, Tomac capitalized on the momentum of an outside line to make the move around his competition into second and then followed up with another pass for the lead in that same section of the track on the very next lap. Tomac went on to lead the remaining 13 laps to grab the checkers with a 6.3-second gap on the rest of the field for his sixth moto win of the season.

As the gate dropped on the second moto, Tomac began his charge from seventh position. After reaching fourth by Lap 5, Tomac found himself stuck behind one of his competitors for the next seven laps before catching a second wind and laying down the fastest lap time (2:08.3) of the moto. With two laps remaining, Tomac managed to pass one other rider before crossing the finish line in second, earning the overall victory (1-2) and further extending his lead in the 450MX championship points standings to 34.

After a respectable qualifying result of fifth to start the day, Joey Savatgy faced adversity in both motos, finishing the day 38th overall (38-34). Despite his best efforts and starting within the top-10 in both motos, Savatgy was forced to withdraw early from both races; in Moto 1 after colliding with another competitor and again in Moto 2 following a crash with a few laps remaining while running in sixth.

Not only were the fans displaying their American pride, but the entire Monster Energy Kawasaki team sported special team hats, graphics on the race bikes, and riding gear, while Savatgy took it to the next level by arriving to the pits with red, white and blue hair.

The defending back-to-back champion and the rest of the Monster Energy Kawasaki team will take a week off, as Round 8 of the 2019 AMA Pro Motocross Championship will pick up on July 20th in Millville, Minnesota for the Spring Creek National.

As the gate dropped on 250MX Moto 2, Cianciarulo shot out of the gate aboard his KX™250, positioning himself in fifth. At the halfway point of the moto, Cianciarulo had reached third but wouldn’t stop there and made his final pass on Lap 12 to reach the finish line in second. Cianciarulo’s 5-2 score placed him on the podium with second overall and he continues to lead the 250MX Class standings with a 25-point advantage.

After riding through the morning practice session and qualifying 11th, Martin Davalos and the Monster Energy/Pro Circuit/Kawasaki team decided he would not line up for motos that afternoon. Davalos has been struggling with lingering injuries throughout the season and after reevaluating his condition that morning, the group decided it was best he sit out in order to focus on the healing process. Davalos will follow up with the doctor later in the week for an updated status.

WorldSBK U.S. Round: Rea Wins The Superpole Race, But Yields To Davies in Race 2

WorldSBK U.S. Round: Rea Wins the Superpole Race, but Yields to Davies in Race 2, While Bautis ...

From Welding to Epoxy Filler and Aerodynamics This whole process has been a test of desires, wi ...

Yamaha to Host Special Presentation for the Next Evolution of R World MARIETTA, Ga. – July 10, ...