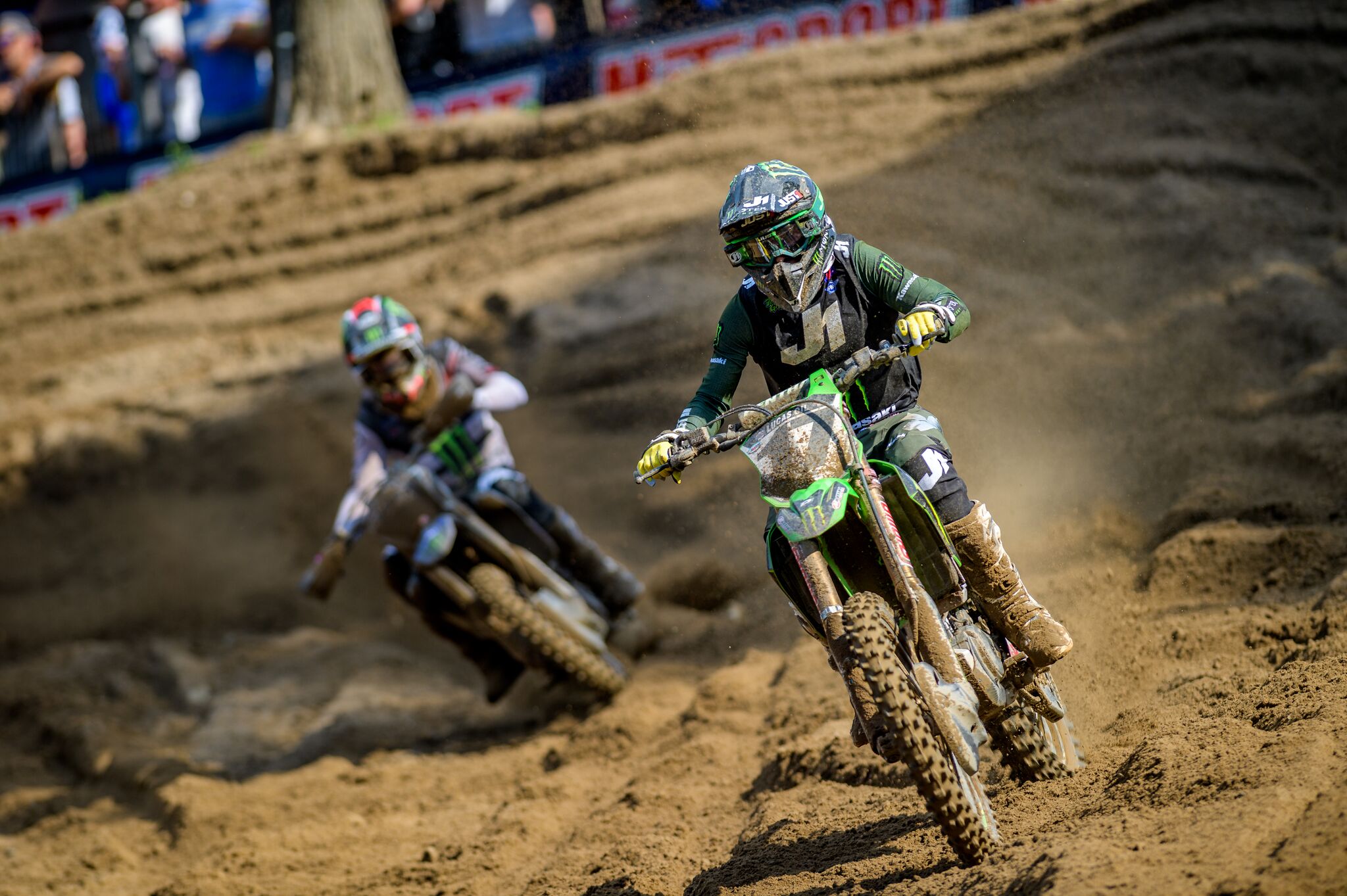 Foothill Ranch, Calif. (June 30, 2019) – Monster Energy®/Pro Circuit/Kawasaki rider Adam Cianciarulo conquered the sandy hills of Southwick at Round 6 of the 2019 AMA Pro Motocross Championship as he captured his fifth overall win of the season finishing 1-2 in the motos, while Monster Energy Kawasaki rider Eli Tomac earned his sixth overall podium finish in third (2-3), both extending their lead in the championship points standings.

As the gate dropped on 250MX Moto 1, Cianciarulo kicked off his conquest by grabbing his first holeshot of the season aboard his KX™250 and taking off with the lead. Having yet to win the first moto at any round this season, Cianciarulo went on to lead every lap and capture his first Moto 1 victory with an 11-second margin of victory.

Moto 2 saw another solid ride from Cianciarulo as he grabbed his second holeshot of the day and began his charge. After fiercely defending the lead for the first half of the moto, the Florida native played it safe to cross the finish line in second, knowing a 1-2 moto score awarded him the overall and extended his points lead in the championship to 23. Veteran rider Martin Davalos had a rough day at The Wick and was unable to complete the second moto following a crash on Lap 4 and finished the day 33rd overall (22-40).

The win marks Cianciarulo’s sixth overall victory of his career, five of which have come this season alone.

“I’m so pumped to get another overall win under my belt. Both motos started out perfectly after nailing the holeshots, and I was able to gap the field in the first moto. This competition is tough though, so I ended up losing the lead in the second moto. I’m proud of the Monster Energy/Pro Circuit/Kawasaki team and what we’ve been able to accomplish so far this season. We’re all looking forward to keeping this momentum going into the last half of the season.” – Adam Cianciarulo

“This weekend was difficult for me for sure. The high physical demands of this track got the best of me and I had a few good get-offs, but I won’t give up. That’s not in my blood. Hopefully things come together next weekend at RedBud and we’ll keep pushing forward.” – Martin Davalos

In the 450MX class, Tomac and Joey Savatgy lined up at the gate side by side aboard their KX™450 motorcycles, ready to take on the 40-rider field. As the gate dropped on Moto 1, Tomac and Savatgy shot out in front in second and sixth, respectively. Tomac fell back a few positions after the first turn but quickly made moves into third by the end of the first lap, while Savatgy ran into some mechanical issues forcing him to pull out of the race. Tomac continued to charge for the front, eventually making a pass into second on Lap 8, where he would go on to cross the finish line.

In Moto 2 Tomac started just inside the top-10,. creating a greater challenge to find the front. The points leader didn’t let that slow him down as he quickly began to make his way around the other riders, reaching third place by Lap 7. Tomac worked hard to maneuver around lappers and continued on to finish third in the moto for third overall (2-3). Savatgy had a strong start to Moto 2 but struggled to find his pace on the challenging sand track. Once he found the lines he was comfortable with and established his flow, he was able to push forward from 10th to finish eighth for 13th overall (36-8).

Tomac entered the day with only a 6-point lead in the championship standings but his consistency continues to pay off and his strong rides in the sand this weekend earned him a 26-point cushion and marks the first time in 2019 a rider will sit atop the 450MX class standings for consecutive races.

“Today ended up being a little tougher than I anticipated. The heat combined with the tough demands of a sand track and constantly being pelted with sand and rocks wore me out. I’m happy to be leaving with another podium finish and the points lead. Now that we’re heading into the second half of the season, I’m going to remain focused on this championship and keep striving for those overall wins.” – Eli Tomac

“The first moto didn’t turn out the way we wanted but I’m glad things came together for the second. The team and I have been working so hard to get back to where we need to be and dial things in in order to be ready on race day, so I’m disappointed that my overall finish wasn’t better. We’ll regroup and give it another shot next weekend at RedBud.” – Joey Savatgy

WorldSBK U.S. Round: Rea Wins The Superpole Race, But Yields To Davies in Race 2

WorldSBK U.S. Round: Rea Wins the Superpole Race, but Yields to Davies in Race 2, While Bautis ...

Yamaha to Host Special Presentation for the Next Evolution of R World MARIETTA, Ga. – July 10, ...