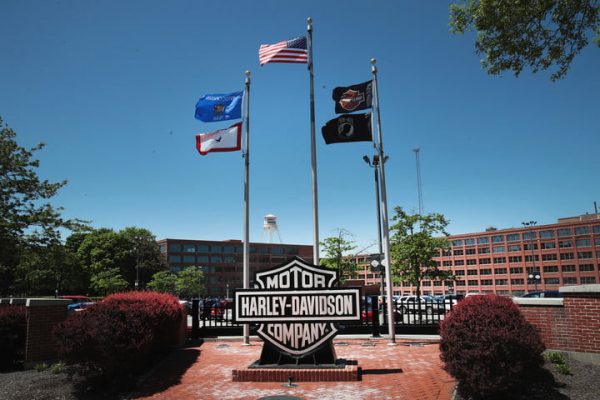 Harley-Davidson’s announcement that it will sell a small displacement motorcycle in China but not the U.S. is no surprise. The iconic Milwaukee-based American motorcycle company is following a game plan it laid out in an April 17, 2017 press release when Harley management set a goal to build the next generation of riders globally by 2027.

The newly announced small bike for China? It’s just part one of the company’s growth plan.

Other than two prototype photos, Harley-Davidson did not reveal details about the small Harley. The release did state, however, that “like all Harley-Davidson products, this new model will embody a distinctive look, sound and feel that will spark powerful connections with riders.”

Note that the company didn’t say the small displacement model will have the same “distinctive look, sound, and feel” as current Harleys, only that riders will connect with whatever combination the new ride has.

Qianjiang, a subsidiary of Geely Technology Group (the same company that owns Volvo), is an excellent choice for the Harley-Davidson collaboration. Founded in 1985, Qianjiang builds and sells motorcycles ranging from 50cc to 1130cc in more than 130 countries worldwide and for the past seven years has been the market leader for large displacement bikes in China. In 2005 Qianjiang bought Benelli, a 100-year old Italian motorcycle manufacturer.

WHY NOT THE U.S? HAVING YOUR CAKE AND EATING IT, TOO

So Harley-Davidson is going to build a new, small motorcycle to sell in Asia. Why not sell it in the U.S. also?

The answer lies in a four-year plan that’s part of the overall 10-year plan for global sales growth. First announced in late July 2018, the “More Roads to Harley-Davidson” plan runs through 2022 and has three “growth catalysts” which I’ll quote because they reveal how Harley-Davidson intends to pull off, at least in the short term, a shrewd business strategy that straddles but does not mix two separate markets.

The three ways Harley plans to grow by 2022:

Note the emphasis on “heavyweight leadership.” Harley isn’t referring to its executives or its riders with the adjective “heavyweight.” Despite inroads by the reborn Indian Motorcycle Company, Harley-Davidson is the big dog of the big bikes. Harley owners like the weight, the ride, the looks, and for sure the distinctive sound of its big twin motorcycles.

Keeping “current riders engaged” is Harley-speak for “don’t mess with it.” Two years ago Harley-Davidson dropped the Dyna model line with its more rigid suspension and harder tail in favor of a significantly re-engineered Softtail line that incorporated several of the former Dyna models with a different frame and suspension. Harley loyalists were not enthused — the most polite way I can express the sentiments expressed by many Dyna fans.

The motorcycle market in the U.S. is shrinking overall, and Harley-Davidson is not immune to the shrinkage. If the U.S. motorcycle market grows in the future — and that’s a big “if” — the company and its bikes need new riders in more significant numbers than ongoing campaigns have attracted so far. Today, the biggest of Harley-Davidson’s traditional motorcycles have the best sales activity. Details on that possibly surprising statement are below.

One way to understand Harley-Davidson’s seeming bifurcated business strategy is the company will stay closer to its traditional motorcycle business model at home to keep the money flowing and maintain its current user base while it experiments with new models in other markets. The dual market strategy is what Harley-Davidson means in the second of three growth catalysts: “meet customers where they are and how they want to engage” both at home and foreign markets.

THE NUMBERS HURT, BUT THEY DON’T TELL THE WHOLE STORY

When you break down Harley-Davidson’s motorcycle unit shipments, the most significant factor is the relative performance by market segment. Harley-Davidson sells motorcycles in three segments: Sportster/Street motorcycles (starting price range $6,899 to $11,299), cruisers ($14,549 to $21,349), and touring motorcycles ($18,999 to $43,889).

In 2018, despite Harley-Davidson’s overall motorcycle unit shipment 5.3% decrease from 2017 to 2018, the touring motorcycle segment increased shipments by 2.2% over the 2017 units shipped, while the less expensive Sportster/Street (- 11.4%) and cruiser (-10.1%) market segment shipments decreased.

So Harley-Davidson’s sales trend is up for its largest and most expensive models. That factor is another reason why introducing a new, small displacement and therefore lower cost model for sale in U.S. dealerships doesn’t look like a good move today.

Harley-Davidson includes new models introduced since 2017 in the 100-motorcycle countdown, but that scorecard is beyond the scope of this article. The Livewire electric motorcycle is coming soon. Also, the More Roads to Harley-Davidson section of the company website outlines several new product lines accompanied by photos of prototypes of future models.

The 2019 Livewire, Harley’s first electric motorcycle is scheduled to begin shipments this summer with a $29,799 starting price.

Harley-Davidson plans to introduce a middleweight platform with three products and four engine displacements ranging from 500cc to 1250cc. Three models are slated for introduction during the 2020 and 2021 launches, including an adventure touring bike and a street fighter in 2020 and a stripped down, aggressive custom motorcycle in 2021.

Following the 2019 Livewire launch, Harley-Davidson plans addition electric models. The two lightweight electric concept bikes pictured above may never see the light as actual products, but they indicate possible directions for future rides in a world of changing mobility alternatives.

So, if you had your heart set on throwing a leg over a new small Harley, you’ll have to move. The new 338cc bike is for Asian markets only, starting with China. Even if that bike sells like crazy in international markets, we won’t get it any time soon, if ever. Harley-Davidson management knows what its stateside community members want — it’s not like they’re shy about expressing their opinion.

In 2027, when Harley-Davidson’s 10-year plan for global growth reaches the reckoning date, its decision to partner with Qianjiang for a new 338cc small bike to kick off a hoped-for huge demand will meet the tallyman. By that date as well, the company’s conscious choice to stick with big iron in the consistently declining U.S. motorcycle market will be judged a brilliant hang-tough stance or a well-intentioned but futile shuffling akin to rearranging deckchairs on the Titanic.

Interesting, but if you’ve been in this industry any length of time, you’ve witnessed numerous fluctuations. It’s easy to claim doom and gloom, but we haven’t stopped having babies, so more motorcyclists are coming on board everyday. Hang on!–Bandit
Share IT: